The Power of Rare Earths

Rare earths have a distinct chemical advantage over competing phosphate reduction products because of their natural affinity for phosphate.

In the ground, cerium and lanthanum exist naturally in mineral complexes, most often in conjunction with phosphate, to which they are preferentially attracted. This cerium/lanthanum mineral is called rhabdophane: (Ce,La)PO4•H2O.

By comparison, aluminum and iron have lower molecular weights (27 and 55, respectively), and do not form strong molecular bonds with phosphorus. They are not as efficient as RE100 and RE300 in removing phosphorus from wastewater streams.

The higher molecular weights of Cerium (Ce) and Lanthanum (La) helps RE100 and RE300 precipitate settle out phosphorus more rapidly during clarification.

RE100 and RE300 also provide additional additional benefits, such as increased sludge density and improved water/solids separation and dewatering. You can see the full list of their benefits here. 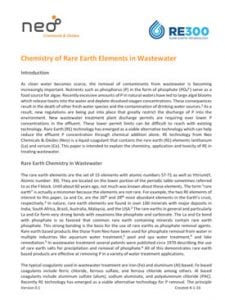 VIDEO: The Power of Rare Earths 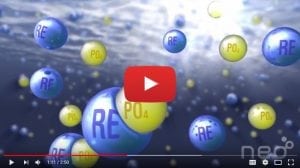