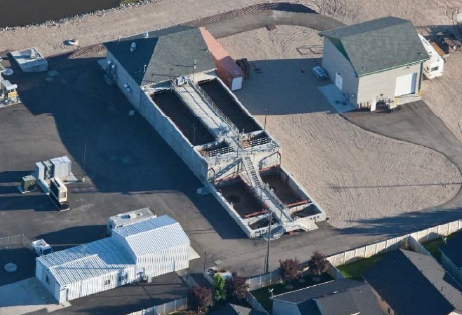 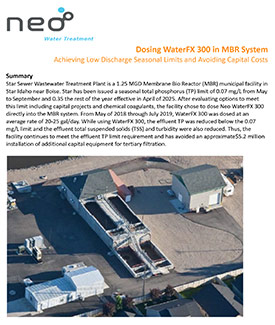 Star Sewer Wastewater Treatment Plant is a 1.25 MGD Membrane Bio Reactor (MBR) municipal facility in Star Idaho near Boise. Star has been issued a seasonal total phosphorus (TP) limit of 0.07 mg/L from May to September and 0.35 the rest of the year effective in April of 2025. After evaluating options to meet this limit including capital projects and chemical coagulants, the facility chose to dose Neo WaterFX 300 directly into the MBR system. From May of 2018 through July 2019, WaterFX 300 was dosed at an average rate of 20-25 gal/day. While using WaterFX 300, the effluent TP was reduced below the 0.07 mg/L limit and the effluent total suspended solids (TSS) and turbidity were also reduced. Thus, the facility continues to meet the effluent TP limit requirement and has avoided an approximate $5.2 million installation of additional capital equipment for tertiary filtration.

Star Sewer is a 1.25 MGD municipal wastewater treatment plant with the overall MBR process depicted in Figure 1 and 2. Historically no coagulants have been used in this process. Without chemical addition or tertiary filtration, the plant optimized the MBR process and operated in 2017 with the following effluent conditions.

Star’s total phosphorus (TP) final discharge limit of 0.07 mg/L was issued in their NPDES permit in 2015 to go into effect April 1, 2025. Star initially looked at 4 scenarios with 2 chemicals.

In the pilot studies, the chemical addition to the MBR options met the desired effluent conditions of less than 0.07 mg/L TP and less than 10 mg/L TSS; however, both had different chemical dose requirements and associated costs. One tertiary filtration system using engineered sand filters was able to meet the specified TP limit however the cloth media tertiary filter trials did not. Chemicals dosed into the MBR also proved to be significantly less expensive than installing a tertiary filtration system for P removal for all scenarios. The pilot trials also determined the initial volume of coagulant required to reach an effluent TP of 0.07 mg/L.

The pilot trials ultimately concluded that over a 20-year lifespan, dosing WaterFX 300 directly into the MBR system was the most economical option by 12% over alum and 35% less expensive than adding a tertiary filtration system. WaterFX 300 demonstrated several other advantages over alum with; pH adjustment (less caustic addition for alkalinity), a lower freezing point than alum, non-hazardous chemical classification, and greater consistency in effluent conditions.

The final phase of the Star Sewer evaluation was a full-scale test in the MBR in the summer of 2018. WaterFX 300 was dosed to control effluent TP to a concentration below 0.07 mg/L and the associated effects on TP, membrane fouling, alkalinity, sludge, and effluent toxicity were measured.

Beginning in May of 2018, WaterFX 300 was dosed directly into the MBR just above the MBR entry flow. The WaterFX 300 dose was found to decrease over time from an initial average of 40 ppmv to a final steady average of 18-22 ppmv while continuing to control the effluent TP concentration, (see figure 4 below).

This difference in chemical use compared to the pilot trial represents an even greater savings than estimated in Table 2. Table 5 below replaces the estimated WaterFX 300 dose with the actual WaterFX 300 dose in the 20-year projection, the lowest cost option is WaterFX 300 by almost 2 million dollars without accounting for the reduction in caustic use.

The third goal of the full-scale trial was to assess the chemical effect on sludge. Compared to using no chemical in 2017, the introduction of alum at this high dose of 400 ppmv increased sludge volume from 570 to 890 lbs per day, a 56% increase, while the influent flow only increased 14% in the same time period. WaterFX 300 increased sludge by only 8% to 615 lbs per day due again to a lower volume of chemical added.

One final observed outcome of the trial was the reduction in caustic chemical addition. The facility uses caustic addition to balance the effluent pH; however, the high dose of low pH alum competes with and neutralizes the system alkalinity which requires more caustic addition to overcome this reaction. WaterFX 300 by comparison is less acidic and at Star WaterFX 300 requires 10-20x less volume of chemical than alum. This effectively means that WaterFX 300 is adding 1000-2000 times less acid to the system than alum and does not compete with caustic or consume system alkalinity. Star saw a reduction in caustic use from around 40 gallons per day to around 5 gallons per day. This reduced caustic use provides a cost and safety benefit that was not included in these life cycle calculations.

Throughout the trial the toxicity of the effluent was also monitored. Whole Effluent Toxicity (WET) tests were performed before WaterFX 300 use and for 2 months during use, with no significant toxicity issues (displayed in Table 6 below). The effluent rare-earth concentration was also monitored and was consistently found to average 0.02 mg/L shown in Table 7 below. By comparison typical effluent concentrations for aluminum in plants using alum are above 1.0 mg/L. 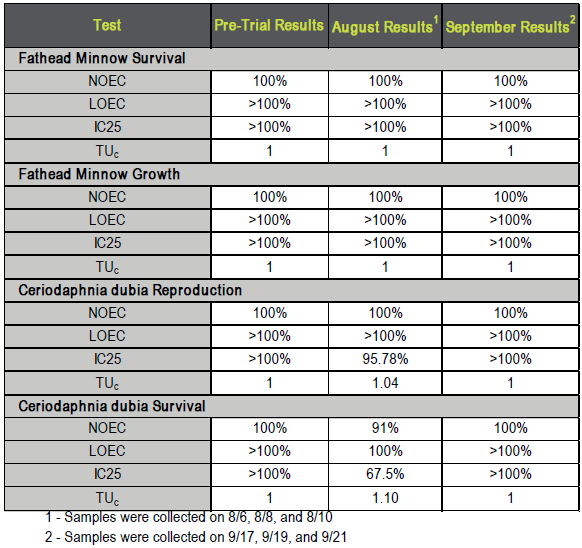 Throughout the 2-year evaluation process, WaterFX 300 proved to be the most cost-effective solution for the Star Sewer MBR plant to meet their low effluent requirement for Total Phosphorus. WaterFX 300 dosed directly in the MBR was demonstrated to meet the effluent conditions with significantly less chemical volume and lower total cost than alum while also reducing the membrane fouling, chemical sludge volume, and caustic use. WaterFX 300 also proved to be more cost effective over a 20-year projection than options that included tertiary filtration capital projects.