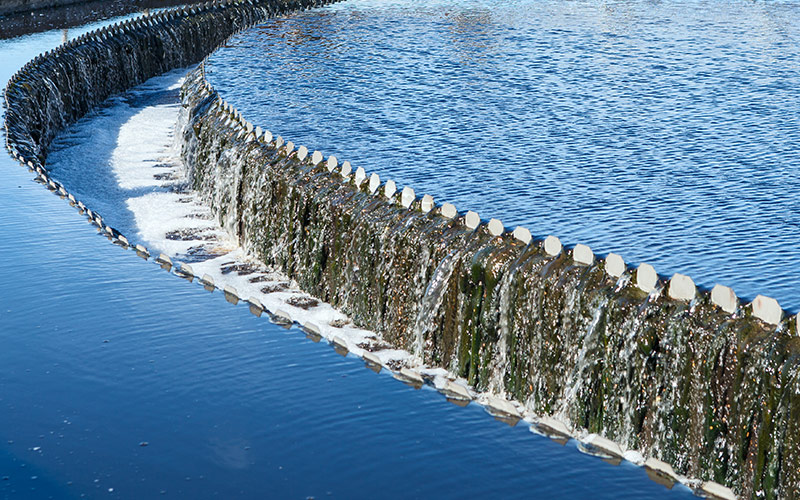 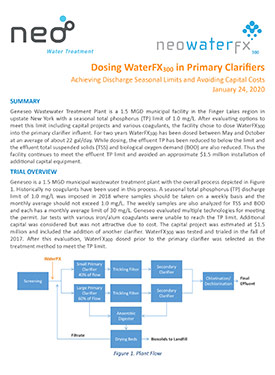 Geneseo Wastewater Treatment Plant is a 1.5 MGD municipal facility in the Finger Lakes region in upstate New York with a seasonal total phosphorus (TP) limit of 1.0 mg/L. After evaluating options to meet this limit including capital projects and various coagulants, the facility chose to dose WaterFX300 into the primary clarifier influent. For two years WaterFX300 has been dosed between May and October at an average of about 22 gal/day. While dosing, the effluent TP has been reduced to below the limit and the effluent total suspended solids (TSS) and biological oxygen demand (BOD) are also reduced. Thus the facility continues to meet the effluent TP limit and avoided an approximate $1.5 million installation of additional capital equipment.

Geneseo is a 1.5 MGD municipal wastewater treatment plant with the overall process depicted in Figure 1. Historically no coagulants have been used in this process. A seasonal total phosphorus (TP) discharge limit of 1.0 mg/L was imposed in 2018 where samples should be taken on a weekly basis and the monthly average should not exceed 1.0 mg/L. The weekly samples are also analyzed for TSS and BOD and each has a monthly average limit of 30 mg/L. Geneseo evaluated multiple technologies for meeting the permit. Jar tests with various iron/alum coagulants were unable to reach the TP limit. Additional capital was considered but was not attractive due to cost. The capital project was estimated at $1.5 million and included the addition of another clarifier. WaterFX300 was tested and trialed in the fall of 2017. After this evaluation, WaterFX300 dosed prior to the primary clarifier was selected as the treatment method to meet the TP limit.

The monthly averages of the influent and effluent TP, TSS, and BOD analysis of the 7-day composite samples are depicted in Figures 2, 3, and 4. The average WaterFX300 dose between samples is also plotted and highlighted by the shaded areas. This data clearly shows that a moderate dose of WaterFX300 (20-30 gal per day or approximately 40 ppmv) into the primary clarifier reduces the TP to below the 1.0 mg/L limit. Although the process without WaterFX300 doesn’t seem to have a problem meeting the TSS and BOD limits, dosing WaterFX300 also reduces the TSS and BOD in the effluent. Furthermore, the ability to turn on and off P removal with the addition of WaterFX300 can be clearly seen. When low P is required, WaterFX300 is turned on. 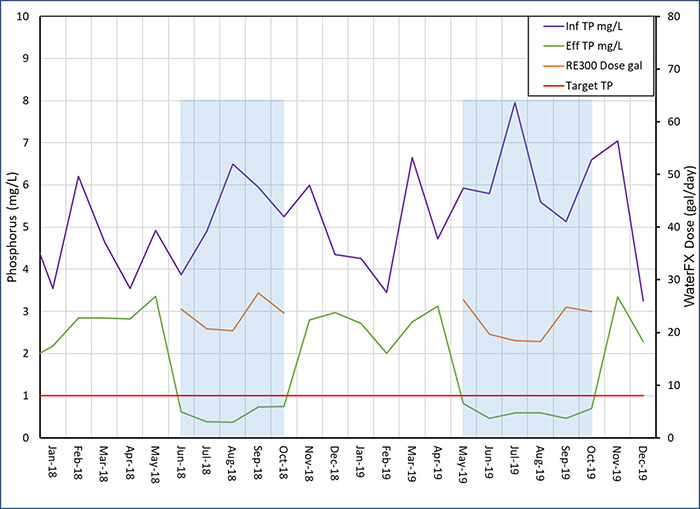 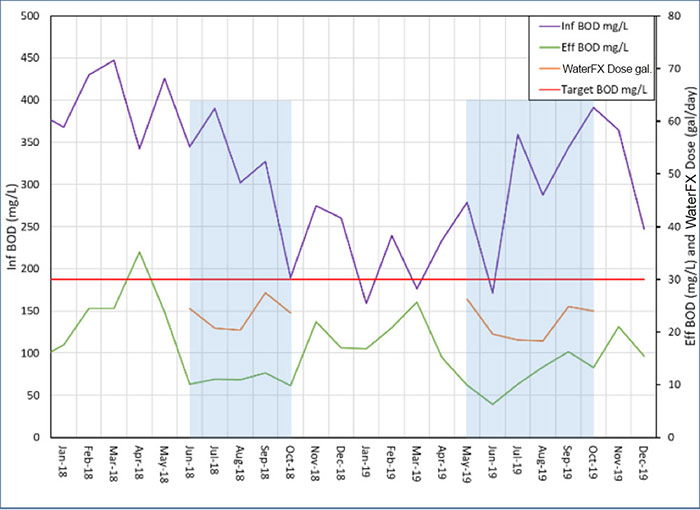 Averages of the monthly data separated into times with and without WaterFX300 addition are presented in Table 1. Averages for both years are also presented. This data further shows the impact of WaterFX300 dosing in the primary clarifier. Effluent TP, TSS and BOD concentrations are reduced by WaterFX300 and the facility has no problems meeting the discharge limits.

Table 1. Averages during periods with and without dosing

Table 2. %Removal during periods with and without dosing 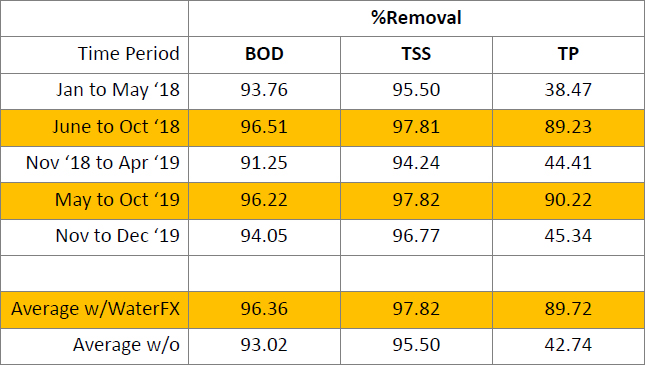 Averages of the monthly data separated into times with and without WaterFX300 addition are presented in Table 1. Averages for both years are also presented. This data further shows the impact of WaterFX300 dosing in the primary clarifier. Effluent TP, TSS and BOD concentrations are reduced by WaterFX300 and the facility has no problems meeting the discharge limits. Table 1. Averages during periods with and without dosing Table 2. %Removal during periods with and without dosing The %removal of each measured contaminant is presented in Table 2. An increase in the %removal can be seen for the time periods when WaterFX300 is dosed for each contaminant.

Whole effluent toxicity (WET) testing was also conducted on a regular basis during the WaterFX300dosing. WET tests were conducted in 30 day intervals. The results of each test showed no toxicity for the effluent water.

With a relatively small dose of WaterFX300 into the influent of the primary clarifier, Geneseo was able to reduce the effluent TP to the levels necessary to meet the new seasonal permit of 1.0 mg/L TP for two years in a row. The added benefit of reduced TSS and BOD in the effluent was also observed while WaterFX300 was dosed. No toxicity was observed in the WET testing. The sludge data collected show only a moderate increase in volume. By dosing WaterFX300 in the primary influent, Geneseo was able to meet the TP permit and avoid the installation of new capital equipment.

The blog of Neo Performance Materials, a Wastewater Treatment Plant Chemicals Company. Enjoy our articles about our products and how we serve the industry, as well as additional information on the industry and the communities we serve.