Toxicity Of Lanthanides In Wastewater 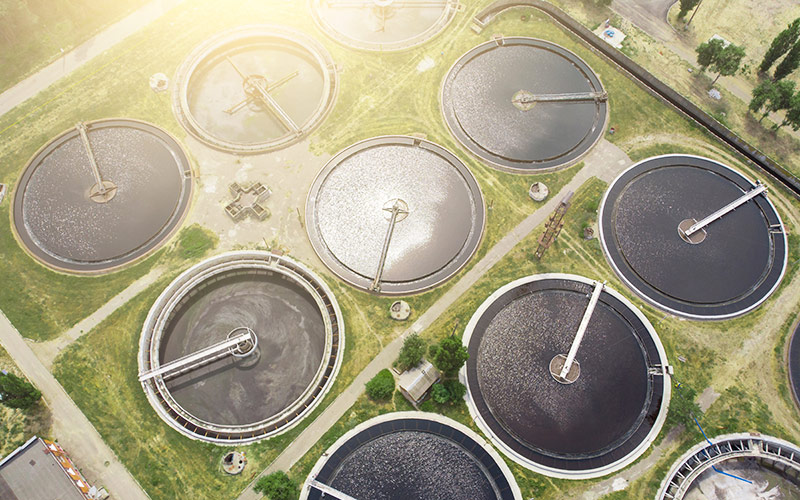 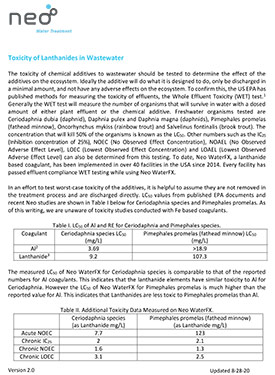 The toxicity of chemical additives to wastewater should be tested to determine the effect of the additives on the ecosystem. Ideally the additive will do what it is designed to do, only be discharged in a minimal amount, and not have any adverse effects on the ecosystem. To confirm this, the US EPA has published methods for measuring the toxicity of effluents, the Whole Effluent Toxicity (WET) test.1 Generally the WET test will measure the number of organisms that will survive in water with a dosed amount of either plant effluent or the chemical additive. Freshwater organisms tested are Ceriodaphnia dubia (daphnid), Daphnia pulex and Daphnia magna (daphnids), Pimephales promelas (fathead minnow), Oncorhynchus mykiss (rainbow trout) and Salvelinus fontinalis (brook trout). The concentration that will kill 50% of the organisms is known as the LC50. Other numbers such as the IC25 (Inhibition concentration of 25%), NOEC (No Observed Effect Concentration), NOAEL (No Observed Adverse Effect Level), LOEC (Lowest Observed Effect Concentration) and LOAEL (Lowest Observed Adverse Effect Level) can also be determined from this testing. To date, Neo WaterFX, a lanthanide based coagulant, has been implemented in over 40 facilities in the USA since 2014. Every facility has passed effluent compliance WET testing while using Neo WaterFX.

In an effort to test worst‐case toxicity of the additives, it is helpful to assume they are not removed in the treatment process and are discharged directly. LC50 values from published EPA documents and recent Neo studies are shown in Table I below for Ceriodaphnia species and Pimephales promelas. As of this writing, we are unaware of toxicity studies conducted with Fe based coagulants.

Table I. LC50 of Al and RE for Ceriodaphnia and Pimephales species.

The measured LC50 of Neo WaterFX for Ceriodaphnia species is comparable to that of the reported numbers for Al coagulants. This indicates that the lanthanide elements have similar toxicity to Al for Ceriodaphnia. However the LC50 of Neo WaterFX for Pimephales promelas is much higher than the reported value for Al. This indicates that Lanthanides are less toxic to Pimephales promelas than Al.

The insoluble material generated (sludge) from lanthanide addition to wastewater has also been tested. The typical concentration of lanthanide chloride in Neo WaterFX is 648 g/L as CeCl3, applied at a volumetric dosage rate of 1:53,000, yields approximately 12 mg REPO4/L (RE represents a lanthanide). This value is lower than the conservatively calculated safe limit of 14 mg REPO4/L for drinking water.4 The treated water is then further processed through a solids/liquid separation system such as a clarifier or filter. Any lanthanide solids that precipitate would therefore be removed, with the actual lanthanide phosphate concentration likely to be much lower than 12 mg/L at the point of discharge.5 The primary potential for human exposure to Neo WaterFX treated water would be through consumption of treated water, whereas aquatic organisms could be exposed at any point after treatment of the water body. Thus, little to no harmful effects are expected from solids generated.

The toxicity of the sludge generated towards denitrification bacteria has also been studied in unpublished sludge respiration inhibition studies. The lanthanide solids present in the sludge would be those discussed earlier such as REPO4, RE2(CO3)3, and RE(OH)3. A study conducted by Intrinsic Technologies for Neo found no toxicity towards activated sludge microbes. As a comparison, for CeO2 the EC50 for inhibition of respiration was greater than 1000 mg/L.10 Based on this the addition of lanthanides to wastewater treatment should have no effect on the microbes.

Neo has also evaluated the effect of land applying the sludge generated in treatment plants using lanthanide based coagulants. This study was performed by Richard Wolkowski, Ph.D. (Extension Soil Scientist at University of Wisconsin‐Madison) at Alfisol Soil Management, LLC. In this study, P availability to corn from rare earth biosolids was investigated and compared to P availability from a commercial P fertilizer and ferric biosolids. Corn was chosen for the study as it is the most common crop treated with biosolids and is grown on four million acres in Wisconsin. Lanthanide biosolids produced soil with P availability between P fertilizer and ferric biosolids as measured by the change in soil test P. The corn whole‐plant dry matter yield either was unaffected by the rare earth biosolids. Thus, the application of lanthanide biosolids is not expected to affect the growth and yield of corn when applied at normal rates that supply the corn N requirement.