Struvite build-up causes major disruption to the operations of wastewater treatment plants, including time, labor and money on the maintenance of capital equipment. Neo’s NeoWaterFX300 solution prevents struvite build-up while it’s managing phosphorus levels and serving other great purposes around the plant. 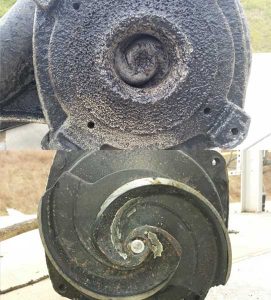 Struvite buildup in wastewater treatment plants can be one of the main culprits robbing your energy efficiency and creating operational nightmares. Once these crystals grow in your pipe, pumps or equipment, you are in for some expensive rehabilitation. It can include taking the affected process off-line, and either hydro-blasting or using chemicals either with a soaking procedure or circulating through to dissolve the crystals. Soaking or recirculation can take hours to maybe even days depending upon the degree of build-up. In extreme cases, struvite may have choked pipes or equipment to such an extent that replacement is required. The chemical solutions also must be disposed of or treated, so you need to be extra careful to be sure it does not upset your toxicity testing or violate an effluent limit.

Prevention of struvite formation leads to much better operations.

Struvite is sometimes referred to as MAP, for the magnesium ammonium phosphate. The crystals may be white, or yellowish, or brownish-white. It often forms in anaerobic digesters, when the ammonia and the soluble ortho-phosphorus are re-released due to the digestion process, combining with the magnesium from hard water. The equilibrium is frequently phosphorus driven. Re-release of phosphorus is typical with aluminum or ferric coagulants, where the bonds to the coagulant are quite weak and easily broken when the pH shifts in the digester. When the soluble phosphate reaches a saturation point, struvite will readily precipitate. From the digester, it can clog centrifuges, pumps, valves, pipes, screw feeders, heat exchangers, anything it passes through.

If struvite control is an issue in your operation, you can reduce downtime, improve operations, and drastically reduce maintenance hassle and costs by preventing it with Neo WaterFX300 (formerly RE300). And struvite prevention is just one of many operational benefits.

Are you interested in improving clarification and lowering your sludge disposal costs? Contact us to learn more about how rare earth elements can help.