Drafted into the fight against Harmful Algal Blooms?

The world’s water resources are being invaded and wastewater treatment plants are often the first to be called into service to fend off this threat. The invader is algae, and it has infiltrated every state in the United States and most countries worldwide. Many experts believe the increase in algal blooms pose one of the most hazardous threats to the earth’s ecosystems. In addition to turning lakes and even slow rivers into a slimy green (or blue, red, or brown) mess, algae rapidly degrade the aquatic environment, depleting oxygen, blocking out sunlight, creating dead zones where nothing can live. They degrade drinking water supplies, spewing taste and odor compounds into water sources that make the water unpalatable. In some cases, the metabolites they spew are toxic, even fatal, leading to restricted recreational uses, causing the death of pets, livestock and wildlife, and even shutting down drinking water supplies altogether. 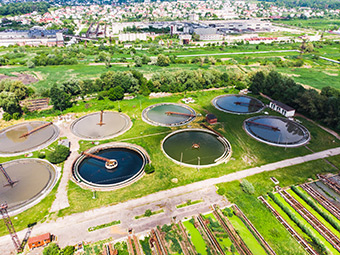 How to control algal blooms in wastewater treatment: cut off the algae’s supply of phosphorous.

The culprits fueling algal blooms are nutrients, nitrogen and phosphorus, with studies have indicating that the chief way to limit blooms is to reduce the phosphorus load in the watershed as much as possible. While the phosphorus contributors vary from watershed to watershed, in most watersheds the vast majority of phosphorus comes from non-point sources such as agriculture (crop irrigation, pastures and animal feed lots), or urban stormwater from lawns and green spaces. One study in Minnesota (2007) found that only 30 percent of the phosphorus load came from point sources of industrial or municipal wastewater treatment plants. Even so, point sources, like wastewater treatment plants, are usually the first ones to receive phosphorus limits, becoming the first line of defense.

Cut off algae’s supply of phosphorus

The weapon that the wastewater treatment plants possess is starvation, starving them of the phosphorus they need to thrive. At a level of just 0.1 mg/l, phosphorus is one of the nutrients leading to the proliferation of harmful algal blooms and limiting phosphorus levels is considered the key to limiting algal growth. Communities hit by algal blooms look for ways to restrict the discharge of phosphorus into their watersheds. As a first step, they turn to regulators to impose stringent limits on wastewater treatment discharges. In a 2016 EPA report, 29% of major and 8% of non-major wastewater facilities reported phosphorus limits. If you are one of these facilities doing your part in the fight against algae, then you know how difficult it can be to meet these low phosphorus levels. Biological treatment, even luxury uptake, is not enough, as biologically bound phosphorus is readily rereleased into your water. Chemical treatment is needed to insure compliance.

Arm yourself with a new, powerful weapon – improve operations and save money

But treatment plant owners now have a powerful new ally in the fight – rare earth minerals. Far superior to traditional iron or aluminum based precipitant aids that act through adsorption only, rare earth minerals, Neo WaterFX300 (formerly RE300), chemically bind the phosphorus, forming a strong ionic bone. While iron and aluminum coagulants require a mole ratio of 4 to 1 to phosphorus, or even higher, Neo WaterFX300 (formerly RE300) can achieve very low phosphorus levels of 0.07 mg/l dosing at a 1 to 1 ratio to phosphorus. This reduces sludge volume by producing a denser sludge, improving clarifier operation and reducing disposal costs, all while achieving reliable, low discharge levels with complete control, with an economical, easy to use solution.

Ready to take your fight for your community’s water resources to the next level? Contact us to learn more about how Neo WaterFX300 (formerly RE300)> starves the algae to win the battle of the bloom. Signup for occasional email updates at https://neowatertreatment.com/contact/get-updates/.